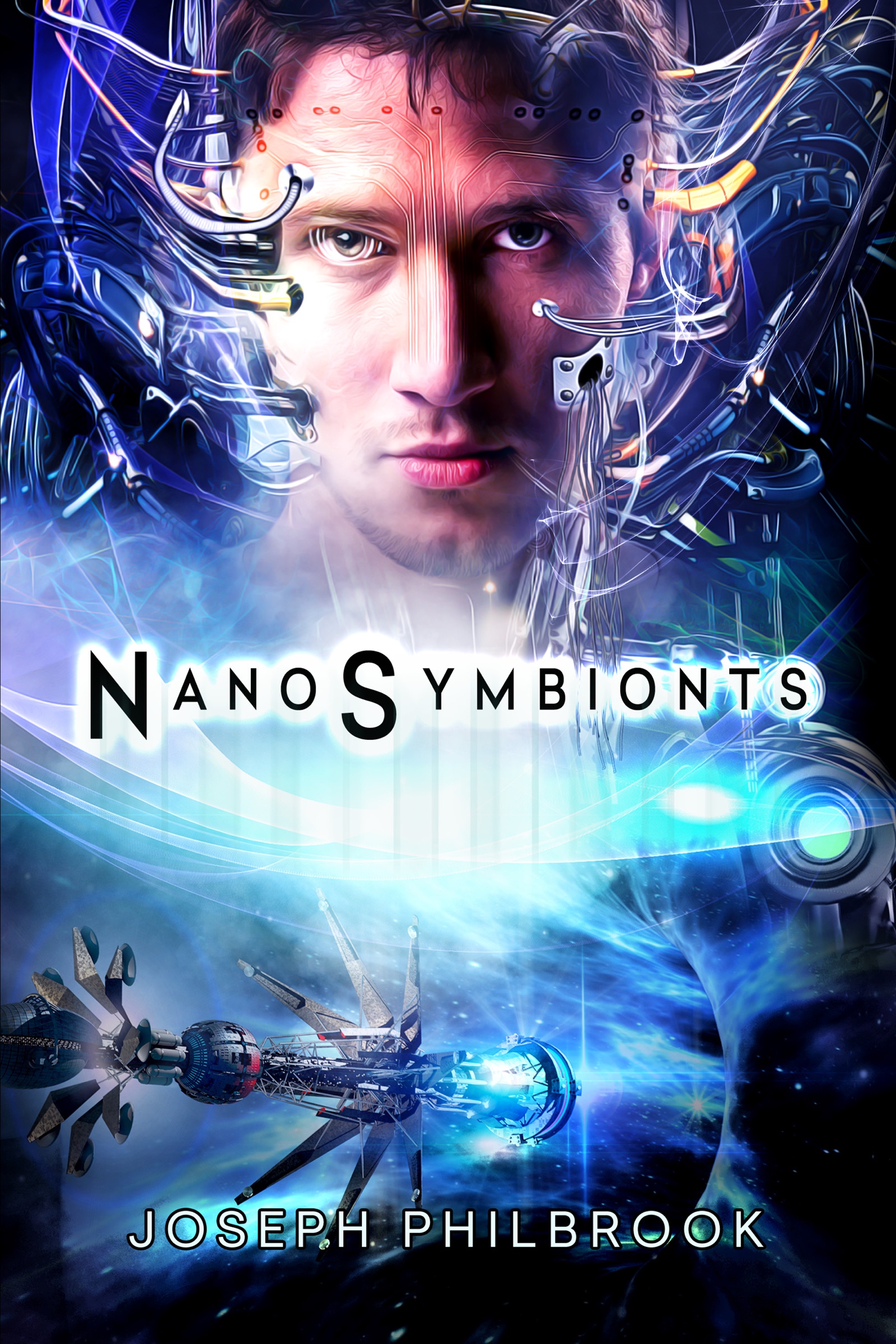 Jake Peterson is on a treacherous mountain road with poor visibility. A man suddenly falls into the road in front of him. Jake swerves and crashes. When he comes to he is alarmed to learn that to save his life the stranger infused him with nanites. Which come with strange abilities and huge problems. As he tries to remain human he learns the galaxy’s fate may depend on his embracing his nanites.

Long before Tom Coggerson became a biosymbiont or was even born there were nanosymbionts. This is the story of Jake Peterson. Who was the manager of a convenience store when he took his girlfriend, Cindy, camping at his old buddy’s private campsite. Which was located off of a windy mountain road. They were supposed to spend the time reconnecting and working out the problems in their relationship. Unfortunately there was an emergency at the store which forced him to go back for most of their first night. On his way back to her he has a terrible accident when he tried to avoid hitting a man who suddenly fell into the road in front of Jake’s truck. When Jake wakes up he finds himself being tended to on an exam table by the man he almost hit. Who says his name is Steve Fontane. Then Steve informs him that in order to save his life his body was infused with nanites and that the nanites had taken up permanent residence inside of him. Jake is quite distressed when he starts to believe that Steve is telling him the truth about the nanites. He is especially disturbed to learn that the nanite would soon be interfacing with his brain.

Jake becomes worried about how long he’d left his easily aroused girlfriend alone at his buddy Dave’s campsite. He knew that the other people there were very sexually active and he hadn’t come back when he’d said he would. Steve informs Jake that he’d used the information in Jake’s wallet to find and hack Jake’s cell phone. Which Jake had evidently left with his girlfriend. Then, since it was within range of his advanced security systems Steve had used insect sized security drones to search the area and find the woman Jake’s phone identified as Cindy. It turned out that Cindy had been left alone a little too long and was currently having sex with a man who’s image Jake recognized as his buddy Dave.

Steve informed Jake that his nanites had revitalized his body so completely that he should expect to deal with the rampant hormones of a teenager. He should also realize that it could take a long time before he will be able to properly communicate with them but that in the meantime the nanites would be affected by Jake’s hormone fueled subconscious desires. Which would likely generate nano-pheromones which would affect every human female who happens to be near him. He also informs Jake that he happens to be at a clothing optional corporate retreat. That’s really just a cover for Steve’s secret underground base full of alien technology. He says that some of the female personnel wouldn’t object to the orgies that Jake’s nanites were likely to inspire. Then Steve makes a very good job offer.

In the days that followed Jake began a new lifestyle that included more sex than he’d ever had in his life. His nanites also helped him learn to use Steve’s alien technology to visit other worlds where his very survival may depend on learning to master his nanites. His nanites help him to learn about the alien technology and culture almost as fast as the computer can feed the information to his brain. Even so he soon finds himself in trouble as he learns first hand about a threat to the entire galaxy. Which leads to his taking drastic action to save millions of planets, including Earth, from a terrible fate but in the process he gets branded as a dangerous renegade.

That’s when Jake’s troubles really begins as he becomes the enemy of the most powerful interstellar organization in the three currently surveyed galaxies. In order to extricate himself from his troubles he’ll have to outsmart both all of his powerful new enemies and also most of his well meaning new friends. It’s not long before his fondest wish is to be able to go back to the old life he left behind. The only real silver lining to his situation is the new potential he now has to live practically forever. Providing of course that he doesn’t get himself killed in the process.